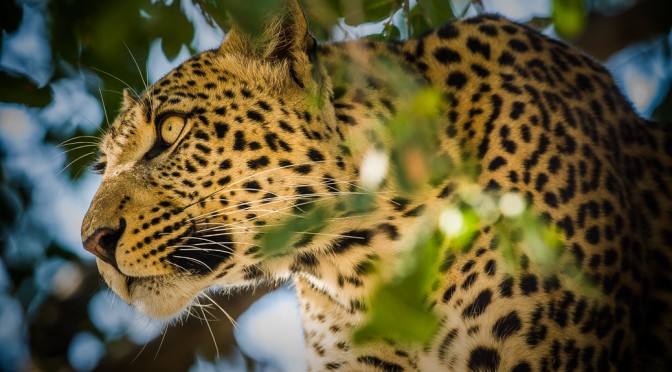 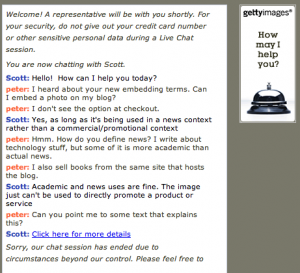 Okay, so I’m trolling. They are not “free.” But editorial and academic uses of unwatermarked images on blogs can now be done for free, as long as the images are embedded in the blog, rather than uploaded to the blog. That looks a lot like free to a lot of people who publish blogs. Including widely-read blogs. Here’s the link.

At right is my chat tonight with a Getty representative. Relevant passage at the bottom of this page.

So what’s going on here?  This is not particularly surprising to me. I’ll outline it here as succinctly as I can. Let me say that this is opinion, including a fair amount of speculation. I wish I had inside information about what they are up to, but I don’t.

On any other day, the photos on my blog are mine. But today, we make an exception, and I’m using photos from the Getty embed service.

Private equity
The first thing to look at, as we consider the new Getty business strategy, is the ownership of the company. They are owned by the Carlyle Group, a private equity firm. While there are plenty of ongoing ventures owned by private equity, it’s pretty common for private equity firms to buy a company, and then sell it for the parts. (As long as the parts are worth more than the purchase price.)

I’m working under the assumption that Carlyle does not want to be operating a stock photo agency in 20 years, or even 10 years.  At minimum, I don’t see them wanting to operate a stock agency that is in partnership with photographers.  2011 revenue was $900 million. If they made 10% profit, that would be $90m, good for you and me, but a pretty tiny return for Carlyle’s 3.3 billion purchase price. And they have a $1.2 billion loan due in 2016. Sometime between now and then, it would be smart for them to sell this thing off and cash out.

I just don’t think that Getty looks like a buy-and-hold for Carlyle. So what would they sell? I don’t think it’s a souped-up old-school Getty. It’s something different.

And keep in mind we’re in a world where Instagram has opened up the spigot for usage of its 20 billion image collection through the API.

Picscout
Picscout is image recognition technology that Getty bought for $20 million. It was developed to help photographers find infringing uses of their photos on the web. It does a very good job of scouring the web and finding multiple instances of the same photo. Getty has built an enforcement department that collects some royalties for these infringements, but this is a lot of work for a small amount of money (again, in their context).

And it only works for pictures that Getty owns outright. If Getty has a non-exclusive right to license a photo, then it can’t go around demanding money from anyone using the photo. The user might have a valid license obtained from the photographer or another stock agent.  This takes all the automation out of the process, and turns it into a high-cost, low-reward endeavor. This business absolutely does not scale in the way Carlyle needs.

Pinterest
Last year, people were scratching their heads over a deal Getty made with Pinterest. Getty is using Picscout technology to indentify images on the social media site and provides permission to use the photos.  But they are not licensing the photos, exactly. Getty agreed to license metadata. On one level, it’s pretty obvious what’s going on. Getty is not obligated to pay photographers for metadata, so that makes sense (if you’re Getty.)

And on another level it works even better. Getty gets to build and deploy some really interesting new technology that provides licensable connectivity between different copies of an image. So you can connect that cute dress photo on Pinterest to the online catalog is was pulled from. It allows Pinterest to say they are working on a rights solution, while not setting  a precedent for actually paying for photos (which could come back to bite).

Getty makes money it does not have to share. The private equity firm that bought Getty gets a great sandbox to build the business, and Pinterest gets some safe-harbor cred when it tries to be bought or go IPO.

(From here out, I’m going to call this “the database”. While it has more elements than a simple database, at the core, like Google, it’s a set of related data.) This database has the potential, in my opinion, to be worth far more than the picture licensing business ever will be, at least in our current hyper-inflated tech bubble.

It’s like what Google can provide, but different. Google Maps is extensible underlying technology. It can be used by nearly any application, business or individual in the world to help them understand context and connection in nearly anything, as long as there is a geolocation component. Imagine if you could do that for photos. Technologies like this are extremely valuable, on many different levels.

This is a photo of Betty, the lady who runs the internet.

Ultimately, the strategy for leveraging Picscout technology is all about connectivity. The database provides connections between images, which enables an understanding of the context of images in a semantic way, a behavioral way, as well as a commercial way. As images become a new language and central to most forms of interpersonal and cultural communication, it’s ever more valuable to understand them in these contexts.

The more robust, ubiquitous, and intelligent the database, the more valuable it is.

So an important part of the business plan is the connectivity enabled by Picscout. But you can get connectivity another way. Embedding images is the ultimate connectivity. The existence of the photo is utterly dependent on the connection between the server and the user remaining intact. This means that the website using the photo is beholden to the service offering the photo. If the hosting stops, the photo disappears. All the photos on this page, for instance.

(This is at the very core of API World. More on that another time).

But even more important, connected web objects like these embedded photos are a means to gather tremendous amounts of information. You can know who sees the photo, who clicks on it, how many times it’s served, to what countries, what times of day, where the viewer came from and where they exit to (to name just a few details).

And if you allow for in-object links, the image can even become a platform for commerce. (Read the snippet from Getty website at the bottom of this page). One day, Getty could decide that  photos of VWs will carry a link to an Amazon store that offers vintage VW parts. They can turn it on, and be in millions of places instantly. The technology to do that is already in HTML 5 and does not require plug-ins or updates by users or anything else. (Check out Stipple if you don’t know what I’m talking about).

Roadkill?
So if the really valuable thing that Getty owns is this connectivity and the semantic understanding of our visual media, what about the stock photo licensing business? It’s certainly a really useful tool for building the database – it offers a whole bunch of useful assets: a lot of images to test on, negotiating power with any social media entity, legal cover for social media companies and official agency for many people in the industry, which allows Getty to implement the database without being bombarded by lawsuits from image creators.

Getty has chosen a strategy (give it away for free, become core service) that is tried and true for company flipping, but much less successful as a long term strategy. To me this speaks very clearly.

When it comes time to sell Getty, the stock photo licensing business – the one where the company partners with photographers and other image makers and does traditional RM or RF or even subscription licensing – will probably be second-fiddle to the technology company. In that context, the most important issue is not screwing up the bigger, more valuable deal. Maybe their image collection is central to the business model, or maybe the far larger set of images outside their collection is more monetizable. The disposition of Getty’s stock photo business is a question mark. They may need to keep and nurture it, spin it off to make a few bucks, or kill it if it’s getting in the way of the bigger deal.

In the end, I think the traditional partnership-based stock business is probably roadkill in this equation, at least from Getty’s perspective. Stock photo partnership is going to be flattened by a truck rolling down the highway that is 100 times larger. Inflated tech money is starting to roll into media and content in a big way. I think we a sale or some other recapitalization of the company before the end of 2016. I’ve actually been waiting for this to start in earnest, and here it is.

Or maybe they just decided to give away the photos for free.

(Editor’s note: Or the photographer)