Dateline Chicago – DePaul University Freshman Madeline Krogh suffered an unexpected computer mishap this week when a pitcher of water was accidentally poured into her new Macbook Pro computer. She was heard at the time to exclaim “Oh, $&!#!” The computer was significantly damaged and had to be sent off to Apple for a repair estimate, and possible replacement. 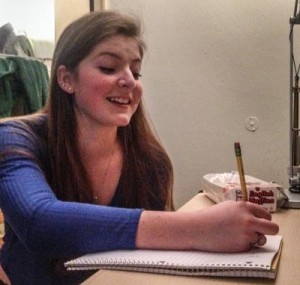 All of the data on Ms. Krogh’s computer was recovered due to the forward thinking of her father, Peter Krogh, who had subscribed her computer to Backblaze. The cloud-based service does a continual backup of the entire hard drive to the Backblaze server through Ms. Krogh’s wireless internet connection.

When asked about the installation of Backblaze, Mr. Krogh said,” I had given her a backup drive to use with Time Machine, but the odds of that happening on a regular basis are, um, slim. She’s a smart kid, but she does not do backups. You’d think the daughter of the guy who wrote the book on data preservation might be a little more tuned in to this possibility. But noooooo.”

Once the extent of the damage was apparent, Mr. Krogh was able to go online and check the status of the backup. To his relief, it was up-to-date, despite zero attention to the process by Ms. Krogh. He was even able to find a copy of the assignment due that afternoon. The document had not been saved properly, but Microsoft Word’s autosave had automatically created a version and BackBlaze stored the document. The assignment was recovered, emailed to Ms. Krogh, and turned in on time.